The HelioTrough collector development follows the successful Skal-ET collector. Starting in 2005 and co-funded by the German Federal Ministry for the Environment, Nature Conservation and Nuclear Safety (BMU), Flagsol developed a collector with improved optical efficiency and significantly lower costs than standard collectors. Together with partners, such as Schlaich Bergermann und Partner, the Fraunhofer Institute for Material Flow and Logistics and the German Aerospace Center (DLR) the development has been successfully completed.

A demonstration loop at the commercial solar power plant in the United States has been in operation since the end of 2009. It is expected to prove the highest collector efficiency, thereby setting new standards in cost efficiency with parabolic trough collectors. This project is co-funded by the U.S. Department of Energy. 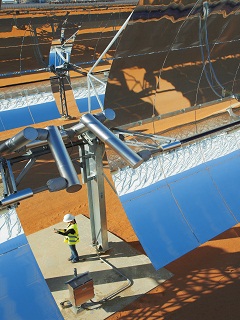